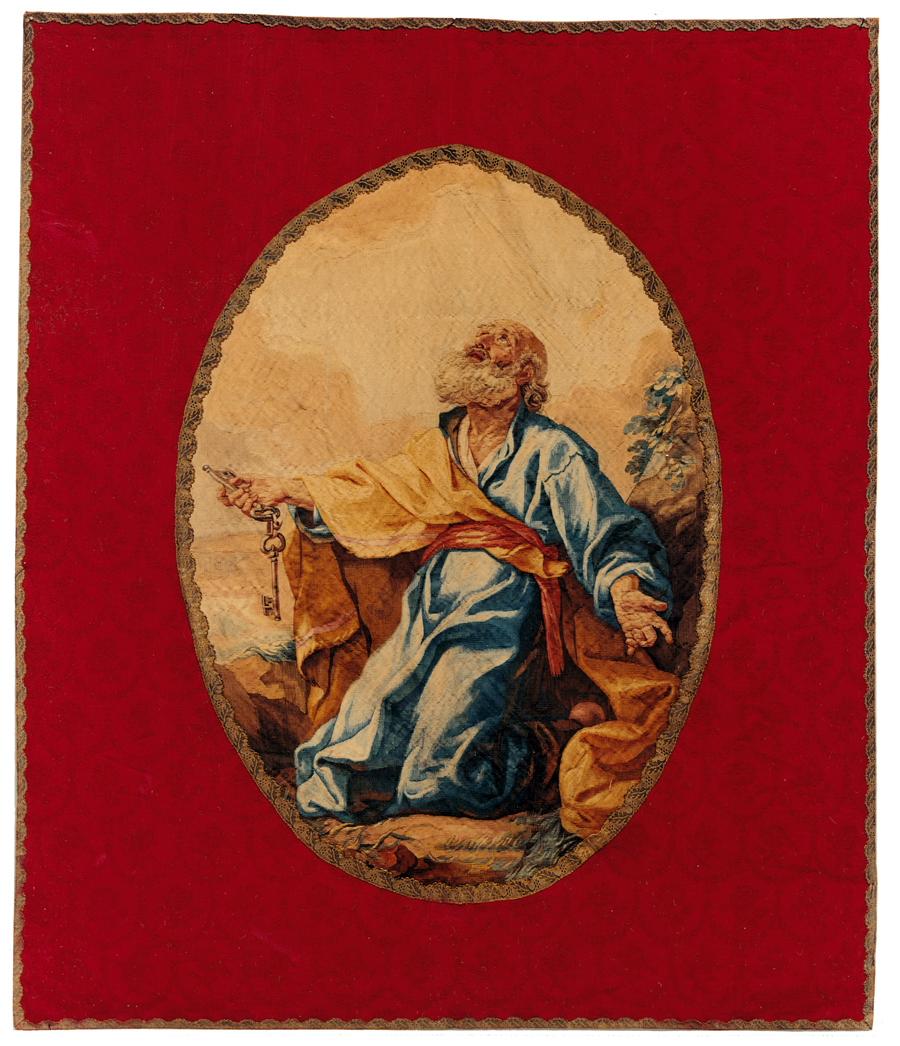 The oval tapestry depicts St Peter in the cardinal episode of the delivery of the keys. Against a bright sky emphasized by the rocks, the fine bearded figure of the apostle from Bethsaida is represented kneeling with open arms and gazing towards the divine rays appearing from the cloud above. The Prince of the Apostles is dressed in a light blue robe with a red sash and a yellow mantle; he holds the keys of the Kingdom in his right hand, symbolizing the spiritual primacy delegated to him by Christ. In ancient iconography the new law was handed in the form of a roll with the formula of the traditio legis (Santa Costanza, Rome). From as early as the 5th century, the keys appear as a symbol (San Paolo fuori le Mura, Rome) after the verses of the Gospel: “…thou art Peter [Kipha, a rock, thus Petros in Greek], and upon this rock I will build my church, and the gates of hell shall not prevail against it. And I will give to thee the keys of the Kingdom of Heaven. And whatsoever thou shalt bind upon earth, it shall be bound also in heaven: and whatsoever thou shalt loose on earth, it shall be loosed also in heaven” (Matthew 16:17-19).

The tapestry is woven mostly in silk, with an extremely fine weaving. The harmonious chromatic range focuses on the bright ivory and beige hues used for the sky, setting off the brown shades of the rocks and the blue, yellow and red of the saint’s clothes. The intense features and the hands of the apostle are expressively rendered with outstanding pictorial effects. These are also evident in the highlights of the clothes, where the material effect of oil brushstrokes is obtained with exceptional technical expertise.

The example can be referred to the genre of devotional tapestry pictures produced by many European manufactories in the 18th century. Contemporary and 17th-century paintings were directly reproduced in wool and silk with homogeneous techniques, making a definite attribution to a particular manufacture difficult in the absence of factual distinctive elements. A comparison between our tapestry and contemporary examples in museums and private collections suggests an attribution to the finest production of San Michele a Ripa in Rome, mainly on the basis of the subject and the technical execution.

Since its beginnings the manufacture focused mostly on religious subjects and small-sized tapestries, to be offered by the pope to ambassadors at the end of their diplomatic mission, or to important personalities traveling through Rome (see Pietrangeli 1984; 89).

These tapestries were superbly woven, sometimes using gold weft. The preferred subjects were copies of old paintings, images of the Evangelists or the Sts Peter and Paul, Princes of the Apostles and patron saints of Rome. As founder of the Church and symbol of the papal authority, the figure of St Peter was dear to the papal court and was often portrayed separately. The images were differently interpreted, but they were chiefly after works by 17th-century painter Guido Reni.

The oval shape of the tapestry also points to the manufacture of San Michele. As witnessed by a number of surviving examples (Madonna with Sleeping Child, Palazzo Apostolico Lateranense, Rome; Repentant Magdalene, Galleria Nazionale, Parma; Mater Dolorosa, Metropolitan Museum of Art, new York) the weaving was made easier by inserting the oval in a rectangle. This was also better suited to the carved frames that usually finished these tapestry pictures, and in all likelihood our example had the same shape. Furthermore, in a St Joseph and the Christ Child woven at San Michele a Ripa in the early decades of the 18th century and now at the Minneapolis Institute of Arts, an interesting correspondence can be found in the colors used for the clothes of St Joseph, clad in a blue robe and yellow mantle. Finally, the interpretation of the landscape is similar to that in larger tapestries from the same manufacture, where the subject is often set against a background combining clear skies traversed by clouds and bare rocks. This can be seen for example in the Crucifixion at the Palazzo Apostolico, Vatican City (see De Strobel 1989; pl. 58).

As yet a prototype completely corresponding to this depiction of the apostle has not been identified in painting. However there are some iconographic similarities, deserving attention, with the figure of St Peter in two paintings: the Repentance of Peter by Guido Reni (Galleria di Palazzo Pitti, Florence) and the Fall of Simon Magus by Pompeo Batoni (Santa Maria Degli Angeli, Rome). Batoni began his work in 1746 for San Pietro in Vaticano, where the painting was displayed on Easter 1755. The solemn expression stresses the references to the painting of Raphael and of Bolognese artists Carracci and Reni. St Peter is represented on the left, specularly to our example and presents close analogies with it reflecting the period of collaboration between the artist and the manufactory of San Michele. Batoni also provided the cartoons for a precious three-piece set with scenes from the life of St Peter for Pope Benedict XIV. The set was woven by Pietro Ferloni between 1742-1746 for the cathedral of San Pietro in Bologna, where it is still housed.

Together with the accurate make of the tapestry, all these references suggest to date it to the period when the manufacture was directed by Pietro Ferloni, from 1717 to 1770, and more accurately to the years around the middle of the century.

THE TAPESTRY IS FOR SALE